Bioinformatics plays an important role in the design of new drug compounds. In this month’s article, we’ll explore one approach in drug design that benefits from the availability of bioinformatics applications in the cancer research community.

Rational Drug Design (RDD). Rational drug design is a process used in the biopharmaceutical industry to discover and develop new drug compounds. RDD uses a variety of computational methods to identify novel compounds, design compounds for selectivity, efficacy and safety, and develop compounds into clinical trial candidates. These methods fall into several natural categories – structure-based drug design, ligand-based drug design, de novo design and homology modeling – depending on how much information is available about drug targets and potential drug compounds. We’ll focus on structure-based drug design in this article and describe a few of its salient features.

Structure-Based Drug Design (SBDD). Structure-based drug design is one of several methods in the rational drug design toolbox. Drug targets are typically key molecules involved in a specific metabolic or cell signaling pathway that is known, or believed, to be related to a particular disease state. Drug targets are most often proteins and enzymes in these pathways. Drug compounds are designed to inhibit, restore or otherwise modify the structure and behavior of disease-related proteins and enzymes. SBDD uses the known 3D geometrical shape or structure of proteins to assist in the development of new drug compounds. The 3D structure of protein targets is most often derived from x-ray crystallography or nuclear magnetic resonance (NMR) techniques. X-ray and NMR methods can resolve the structure of proteins to a resolution of a few angstroms (about 500,000 times smaller than the diameter of a human hair). At this level of resolution, researchers can precisely examine the interactions between atoms in protein targets and atoms in potential drug compounds that bind to the proteins. This ability to work at high resolution with both proteins and drug compounds makes SBDD one of the most powerful methods in drug design.

Let’s consider how SBDD methods have been used in designing drugs for a well known cancer-related protein complex. Two protein targets that have been studied extensively in cancer research are p53 and MDM2. These two proteins form a single p53-MDM2 complex as part of a cell-signaling pathway that regulates cell division. Mutated forms of p53-MDM2 result in various forms of tumors and cancers. Several decades of research have been aimed at designing small-molecule compounds that restore the normal function of p53-MDM2, and consequently reduce or eliminate certain forms of cancer.

One well-known anticancer drug - “nutlin” - has been developed by Roche Pharmaceuticals to restore the normal functioning of MDM2. (Technically, “nutlin” goes by the name cis-[4,5-bis-(4-bromophenyl)-2-(2-ethoxy-4-methoxyphenyl)-4,5-dihydroimidazol-1-yl]- [4-(2-hydroxyethyl)piperazin-1-yl]methanone, but let’s not get into naming conventions!). SBDD methods played an important role in this development. Figure 1 shows the 3D structure of MDM2 as derived from x-ray crystallography studies. MDM2’s backbone structure and amino acid sidechains are shown in multicolored stick form. Five separate “nutlin” molecules are also shown docked along the protein’s surface and deeply embedded in hydrophobic pockets and cavities. 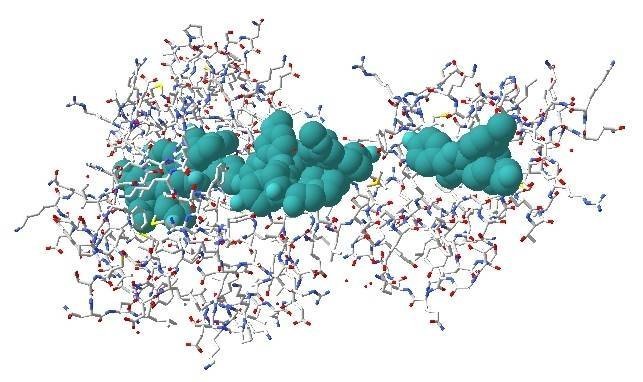 The beauty of the SBDD method is the extremely high level of detail that it reveals about how drug compounds and their protein targets interact. From the snapshot view in Fig. 1 we can identify the exact location of all five “nutlin” compounds, their individual 3D orientations relative to MDM2’s surface and interior amino acids, and how deeply embedded each “nutlin” compound is in the interior of MDM2. This information is useful in designing the 3D shape of the “nutlin” parent compound or various analogues of the drug. This information also assists researchers in designing drug compounds that bind selectively and tightly to MDM2, thus leading to more potent and safer cancer drugs.

Docking Ligands. One of the key benefits of SBDD methods is the exceptional capability it provides for docking putative drug compounds (ligands) in the active site of target proteins. Most proteins contain pockets, cavities, surface depressions and other geometrical regions where small-molecule compounds can easily bind. With high-resolution x-ray and NMR structures for proteins and ligands, researchers can show precisely how ligands orient themselves in protein active sites. Open source bioinformatic tools such as VMD and NAMD, for example, help scientists examine multiple binding poses to determine which orientation is most likely to occur.

Furthermore, it’s well known that proteins are often flexible molecules that adjust their shape to accommodate bound ligands. In a process called molecular dynamics, SBDD allows researchers to dock ligands into protein active sites and then visualize how much movement occurs in amino acid sidechains during the docking process. In some cases, there is almost no movement at all (i.e., rigid-body docking); in other cases, such as with the HIV-1 protease enzyme, there is substantial movement. Flexible docking can have profound implications for designing small-molecule ligands so this is an important feature in SBDD methods.

Lead Optimization.After a number of lead compounds have been found, SBDD techniques are especially effective in refining their 3D structures to improve binding to protein active sites, a process known as lead optimization. In lead optimization researchers systematically modify the structure of the lead compound, docking each specific configuration of a drug compound in a protein’s active site, and then testing how well each configuration binds to the site. In a common lead optimization method known as bioisosteric replacement, specific functional groups in a ligand are substituted for other groups to improve the binding characteristics of the ligand. With SBDD researchers can examine the various bioisosteres and their docking configurations, choosing only those that bind well in the active site. A few examples of bioinformatics tools that aid in lead optimization efforts are BIOSTER, WABE, and ClassPharmer Suite.

Richard is the Founder and Chief Scientific Officer of RMC Biosciences Inc., a firm that offers services in Bioinformatics and Computer Aided Drug Design. Dr. Casey received a Ph.D. in Biological Sciences from Colorado State University. He has 20-plus years experience in Computational Sciences, Information Technology and High-Performance Computing. He has held corporate and academic positions at Hewlett-Packard, Boeing Computer Services, Arizona State University, Colorado State University, the Alabama Supercomputer Center, and the Institute for Computational Studies at CSU and was the founder of a software consulting firm, Alpine Computing Inc. He holds a Project Management Professional Certificate and a Bioinformatics Certificate from Stanford University. Richard can be reached at [email protected].