This article originally appeared on the BeyeNETWORK

In last month’s article, we examined the evolution of measuring the value of technology initiatives. In particular, we observed that the traditional methods of measuring ROI (e.g., payback, Net Present Value and cash flow) are rapidly being replaced by a much more aggressive formula:

With this approach to evaluating technology investments, the emphasis is on making sure that the technology infrastructure for supporting regulatory compliance, SEC reporting and adherence to emerging legislation (e.g., U.S. Patriot Act, Sarbanes-Oxley, Graham-Leach-Bliley) is absolutely in place.

This is a tall order to fill in financial institutions today. For almost a decade, major investments in technology infrastructure (pipes, plumbing and data) have fallen by the wayside as investments flowed into customer relationship management and Internet solutions. With the emphasis on compliance, the focus has shifted to the realization that what is missing is elemental—it is the data.

Ever since the emergence of the consumer as a major revenue source for financial institutions, these institutions were siloed into Lines of Business (LOBs). This organizational split was very feudal. It started at the CEO and encompassed everything—staff, budgets, business processes, technology and the data. The concept of “enterprise” was (or is) hosted in the embodiment of the CEO alone.

This management strategy works well until the organization tries to comply with the Anti Money Laundering requirements, or Section 326 of the U.S. Patriot Act or even Basel II. All of which require that data from all LOBs be conjoined.

Earlier this year, I was speaking with the general auditor for one of the top five financial institutions in the United States. The issue under discussion was data—quality, governance, security and access. As we began to review the data requirements for compliance and the audit universes for the institution, it became obvious that all data was siloed by LOB and at no point other than the general ledger did the “E” word enter the discussion. His comment was, “There is no ’E’ in bank.” He also drew an analogy to the Huns invading Europe—people running through the halls of the technology areas screaming, “Enterprise Data is coming!” No one is prepared for dealing with data aggregated into enterprise views. Who owns it? Who fixes it? Who maintains it? Who do they report to?

Over the years, data quality and governance have evolved within the silo. Historically, the business has “owned” the applications and the data supporting them. Technology support and data store maintenance have been organized and managed in alignment with the business.

Now, the paradigm has shifted. Someone must aggregate data at the enterprise level, yet no internal organization exists to make this happen. To complicate matters, business data stores have been point-sourced with source files being hit by hundreds of different COBOL programs. The result is a spaghetti junction that breeds fear in the heart of any executive who would hate to see their picture accompanying a newspaper article that begins with “SEC Launches Probe ….”

The Home of Enterprise Data 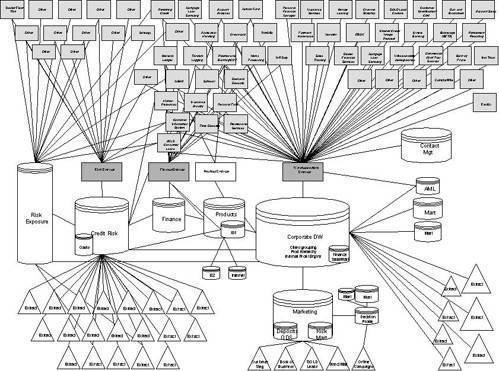 Considering the “spaghetti junction” above, how does your approach to sourcing enterprise data compare? Is it sourced in such a way that you have lineage and transparency as required by Sarbanes-Oxley? Sourced in such a way that you have complete coverage as it relates to audit, reconciliation and control? It quickly becomes obvious that what was once billed as the “enterprise” corporate data warehouse has been compromised by duplicate sourcing, buried data transformations, and data governance procedures that place LOBs in conflict with one another—to the point that senior executives and board members are seriously questioning their ability to adequately manage the institution as an “enterprise” and, in some cases, stay out of regulator jail.

The answer to this quandary is very complex and one that touches every person within an organization. The technology response is fairly straightforward and not rocket science. The response is complex, however, because it forces a change in corporate culture, the concepts of ownership and accountability and even the concepts surrounding data itself.

At the core, keeping the institution off the front page of the Wall Street Journal is all about data—enterprise data that is sourced, published, and governed in a manner that enables the LOBs to purse their individual market spaces with complete flexibility and freedom while enabling senior management to have a single version of the truth by which they can manage. This would, indeed, be nirvana. 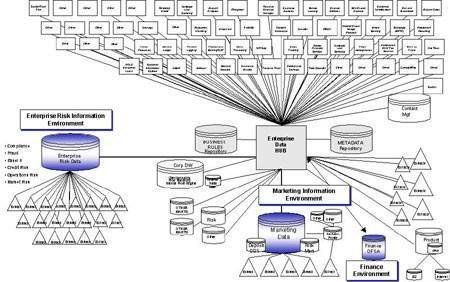