Thank you for joining!

In the ever-burgeoning world of big data compounded by the cloud and internet of things, NoSQL database technology is gaining popularity as perhaps a solution to scalability and performance issues that relational databases and the SQL programming language can't address. Even though the adoption rate of relational databases continues to be very high, more than one-fourth of respondents to an ongoing TechTarget survey say they've installed NoSQL systems. NoSQL software is especially useful in processing and analyzing massive amounts of unstructured and semi-structured data as well as data stored on multiple virtual servers in the cloud. Yet, in many cases, NoSQL is grossly misunderstood, partly because of its very name. NoSQL, or not only SQL, lives under the misconception that it prohibits SQL -- as in "no SQL allowed" or SQL with a slash through it. Not so. Even though some NoSQL systems are entirely nonrelational or simply avoid relational functionality, NoSQL and SQL can coexist.

For those evaluating and considering deployment of NoSQL databases, this handbook raises enterprise and functionality issues that need to be addressed. In the first feature, consultant David Loshin explores one form of NoSQL software called graph databases, which provide an easily understandable and flexible framework for capturing, manipulating and analyzing data to help hasten development of analytics apps. In a Q&A second feature, enterprise information architect Mike Bowers says "NoSQL is completely reinventing the database from the inside out," yet many NoSQL databases lack the necessary ACID compliance. And in the third feature, consultant David A. Teich believes that in the relational versus nonrelational database tug-of-war, relations between NoSQL and SQL can indeed be symbiotic. 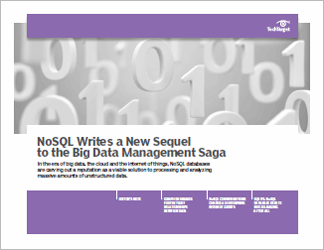